In the first post of this series Roulette Generators (RG) are explained. Here are the files for Winplot or Geometer’s Sketchpad. Use them to quickly see the graphs of these curves by adjusting one or two parameters.

While writing this series of posts I was intrigued by the cusps that appear in some of the curves. In Cartesian coordinates you think of a cusp as a place where the curves is continuous, but the derivative is undefined, and the tangent line is vertical. Cusps on the curves we have been considering are different.

The equations of the curves formed by a point attached to a circle rolling around a fixed circle in the form we have been using are:

For example, let’s consider the case with 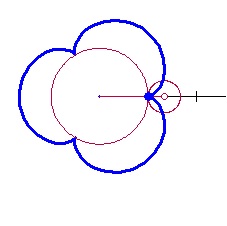 . At the cusps dy/dx is an indeterminate form of the type 0/0. (Note that at

and likewise for the sine.) Since derivatives are limits, we can apply L’Hôpital’s Rule and find that at

This is, I hope, exactly what we should expect. As the curve enters and leaves the cusp it is tangent to the line from the cusp to the origin. (The same thing happens at the other two cusps.)  At the cusps the moving circle has completed a full revolution and thus, the line from its center to the center of the fixed circle goes through the cusp and has a slope of tan(t).

The cusps will appear where the same t makes dy/dt = 0 and dx/dt =0 simultaneously.

The parametric derivative is defined at the cusp and is the slope of the line from the cusp to the origin. Now I may get an argument on that, but that’s the way it seems to me.

A look at the graph of the derivative in parametric form may help us to see what is going on. In the next figure

The video shows the curve moving through the cusp at. Notice that as the graph passes through the cusp the velocity vector changes from pointing down to the right, to the zero vector, to pointing up to the left. The change is continuous and smooth.

Velocity near a cusp.

Here is the whole curve being drawn with its velocity and the velocity vectors.

(If you are using the Winplot file you graph the velocity this way. Open the inventory with CTRL+I, scroll down to the bottom and select, one at a time, the last three lines marked “hidden”, and then click on “Graph.”). The Geometer’s Sketchpad version has a button to show the derivative’s graph and the velocity vectors.

The general equation of the derivative (velocity vector) is

Notice that the derivative has to same form as a roulette.

Finally, I have to mention how much seeing the graphs in motion have helped me understand, not just the derivatives, but all of the curves in this series and the ones to come. To experiment, to ask “what if … ?” questions, and just to play is what technology should be used for in the classroom. See what your students can find using the RGs.