A word before we look at one of my favorite AP exam questions, I put some of my presentations in a new page. Look under the “Resources” tab above, and you will see a new page named “Presentations.” There are PowerPoint slides and the accompanying handouts from some talks I’ve given in the last few years. I also use them in my workshops and AP Summer Institutes.

This continue a discussion of some of my favorite question and how to use them in class.You can find the others by entering “Good Question” in the search box on the right.

Today we look at one of my favorite AP exam questions. This one is from the 1995 BC exam; the question is also suitable for AB students. Even though it is 20 years old, it is still a good question.  1995 was the first year that graphing calculators were required on the AP Calculus exams.They were allowed, but not required for all 6 questions.

and figure 2 as the graph of

.  The question then allowed as how one might think of the graph is figure 3 as the graph of

, the sum of these two functions. Not that unreasonable an assumption, but apparently not correct.

Part a: The students first were asked to sketch the graph of

in a window with [–6, 6] x [–6, 40] (given this way). A box with axes was printed in the answer booklet.  This was a calculator required question and the result on a graphing calculator looks like this:

Students were expected to copy this onto the answer page. Note that the graph exits the screen below the top corners and it does not go through the origin. Both these features had to be obvious on the student’s paper to earn credit.

Part b: The second part of the question instructed students to use the second derivative of

to explain why the graph does not look like figure 3.

Students then had to observe that the second derivative was always positive (actually it is always greater than or equal to 1) and therefore the graph is concave up everywhere. Therefore, it cannot look like figure 3.

Part c: The last part of the question required students to prove (yes, “prove”) that the graph of

Then considering the sign of the second derivative, if

and there are no inflection points (the graph is always concave up). But, if 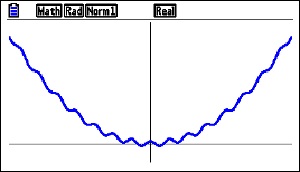 Using this question as a class exercise

1995 was the first year graphing calculators were required on the AP Calculus exams. They were allowed for all questions, but most questions had no place to use them. The parametric equation question on the same test, 1995 BC 1, was also a good question that made use of the graphing capability of calculators to investigate the relative motion of two particles in the plane.   The AB Exam in 1995 only required students to copy one graph from their calculator.

Both BC questions were generally well received at the reading. I know I liked them. I was looking forward to more of the same in coming years.

There was an attempt the following year (1997 AB4/BC4), but since then nothing investigating families of functions (i.e.  like these with a parameter that affects the shape of the graph) or anything similar has appeared on the exams. I can understand not wanting to award a lot of points for just copying the graph from your calculator onto the paper, but in a case like this where the graph leads to a rich investigation of a counterintuitive situation I could get over my reluctance.

But that’s just me.