A common question in (older?) textbooks is to give students a function or relation and have them graph it without technology (because in the old days technology was not available). Students had to find all the appropriate information without hints or further direction: they were supposed to know what to do and do it.

AP exam questions, for legitimate and understandable reasons, do not ask for as complete an analysis. Rather, they ask students to find specific information about the function or its graph (extreme values, points of inflection, etc.). For the same legitimate and understandable reason many of the features are not considered; the other concepts are tested on different questions.

I think that the full-analysis-from-scratch approach, while not appropriate for an AP exam question, has its merits. The big difference is that students need to be creative in their investigation; not just focus on a few items pointed to by the question.

With that in mind, let’s consider the following question asked three ways.

. Discuss the graph of the relation giving reasons for your conclusions. Include a brief mention of any unproductive paths you followed and what you learned from them.

. Find its extreme values and any asymptotes, and vertical tangents (if any). Discuss in detail the appearance of the graph near x = –2 and discuss the slopes in that area. Explain how you arrived at your results.

Closer to an AP style form. The function here is the top half of the function above.

(a) Find the local maximum and minimum values of the function. Justify your answer.

(b) Where does the function had a vertical asymptote? Justify your answer.

. What does this say about the graph?

The real question is can you ask it the first way?

Here is my solution to the first form; this will also give the answers to the other forms. After the solution, I’ll discuss some ideas on how to score such a solution.

The graph of the relation 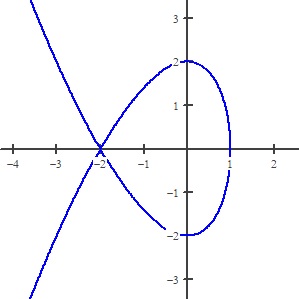 The domain of the function is

. Values greater than 1 will make the left side of the equation greater than 4 regardless of the value of y.  The range of the relation is all real numbers.

The function is symmetric to the x-axis since substituting (–y) for y will give the same expression. The equation of the top half is

and the lower half is

The derivative for the top half is

does not exist at x = 1 specifically,

. Therefore, the line x = 1 is a vertical tangent. By symmetry for the lower part of the graph

.  And x = 1 is its vertical asymptote as well. The slope of the original relation changes from positive to negative at x = 1 by going not through zero but from

when x = 0 and when x = –2. At (0, 2) the derivative changes from positive to negative; this is a local maximum point by the first derivative test. The lower half has a local minimum point at (0, –2) by symmetry.

False step: At first, I thought this meant that the two sides were tangent to the line x = –2 making the point (–2, 0) on the top half a cusp. I tried to see if this was true by graphing in a very narrow window. This did not show anything: the graph looked, on zooming in, like an absolute value graph. It turned out that an absolute value was involved.

I then made a table of values for the derivative near the point and found that the values appeared to be approaching a number near –1.7 from the left and near +1.7 from the right. I stated thinking maybe

Then I changed the constants to parameters and played with the sliders on Desmos (here). With a slight change in the constants the graph appeared to have a nice rounded local minimum near x= –2. Other values showed two separate pieces with vertical tangents near x= –2. This confused me even more.

Next, I did what I should have done earlier: I graphed the top half and its derivative (figure 2): 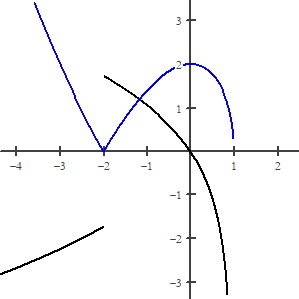 Figure 2. The top half in blue and its derivative in black.

The derivative has a finite jump discontinuity at x = –2. I remembered seeing this kind of thing before and though it involved an absolute value of some kind. Still confused, I decided to investigate the derivative further (which I also should have done sooner).

The derivative at x = –2 is an indeterminate form of the 0/0 type. This means that by substituting you get an expression that really doesn’t help; you may still evaluate the limit (remember derivatives are limits) by other methods. Factoring the derivative (using synthetic division on the radicand) gives

And now we see that

This agrees with the derivative’s graph. The top graph (and bottom’s by symmetry) comes to an arrow-like point (sometimes called a node) at (–2, 0). The slope on the left approaches

and on the right approaches

I admit I’ve had a few more years of experience with this sort of thing that a first-year calculus student. I expect this would be difficult for most students who have never seen a question like this, so working up to it with simpler questions is how to start.

In grading this sort of question, you need to consider:

I would be happy to hear if you tried this or something similar and so would the other readers of this blog. Please use the “Comment” button below to share your thoughts.