First, a new resource has been added to the resource page.  An index of all free-response questions from 1971 – 2018 listed by major topics. These were researched by by Kalpana Kanwar a teacher at Wisconsin Heights High School. Thank you Kalpana! They include precalculus topics that were tested on the exams before 1998. These may be good for your precalculus classes. (Remember that the course description underwent major changes in 1998 and some topics were dropped at that time. These include the “A” topics (precalculus), Newton’s Method, work, volume by cylindrical shells among others. Be careful, when assigning old questions; they’re good, but they may no longer be tested.)

Optimizations problems are situations in which some item is to be made as large or small as possible. Often this is the minimum cost of producing something, or to maximize profit, or to make the largest area or volume with the least material.

While these problems are found in most of the textbooks, they almost never appear on the AP Calculus Exams. The reason for this is that the first step is to write the equation that models the situation. This step does not involve any “calculus.” If a student cannot do this or does it incorrectly, then there is no way to earn the calculus points that follow. On the exams, students are given an expression and asked to find its maximum or minimum value.

Using the lengths marked in the drawing,

are all perpendicular to

To find the minimum distance find the derivative of AD + DB and set it equal to zero.

Now, we need to be clever:

See the illustration of this in Desmos here and see an easier way to do this problem.

The conic sections all have interesting reflection properties that are quite useful.

The Ellipse: A light ray leaving one focus of an ellipse is reflected by the ellipse through the other focus of the ellipse. The angle of incidence and the angle of reflection are between the segments to the foci and the normal to the ellipse.

The computation is done using a Computer Algebra System (CAS) and is shown below, the line-byline explanation follows: 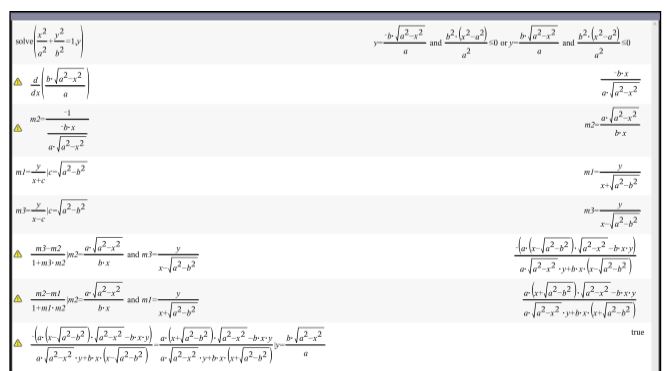 An illustration using Desmos is here. Ellipses are used as reflectors in medical and dental equipment so that a relatively dim light source can be concentrated at the place where the doctor or dentist is working without “blinding” everyone in the room. There are also ceilings that reflect sound from one focus to the other without anyone elsewhere in the room hearing. These are only a few of their uses.

The hyperbola: A light ray from one focus of a hyperbola is reflected as though it came from the other focus. This is true whether the reflection is from the side nearer the focus or farther from the focus (reflection from the convex or the concave side.

The computation is like the ellipse computation with only a few sign changes. I will not reproduce it here. If you want to try use

Hyperbolas are used in telescopes and magnifying mirrors to enlarge the image.

If you try to prove this on use

to avoid working with an undefined slope. The focus is at

There is a Desmos illustration here

Parabolic reflectors are used in various kinds of spotlight and telescopes and for radar dishes. They are also used for satellite dishes for cable TV; you may have one at home.