There is a difference between mathematics and the “real world”: In the real world you are allowed to do whatever you want, as long as there is no law against doing it; in mathematics, you cannot do something unless there is a law that says you may.

There are several mistakes students make when computing this integral.

First, they may not realize this is an improper integral and compute incorrectly:

Since the laws concerning improper integrals do not allow this, you may not do it.

Or, they might think that it does converge to zero by the symmetry of the graph. There is no law (theorem) that permits calculating limits based on the appearance of a graph. 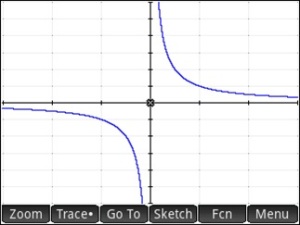 Finally and most often, they may start out following the rules but go astray. The law says you must find deal with the discontinuity at x = 0 by using one-sided limits:

The mistake is subtler here. It is correct to say that

, but what that really means is that the limit does not exist (DNE). Then in the last line above you cannot say

Students need help in understanding this. Here are three ways to think about it.

This question was discussed recently on the AP Calculus bulletin board. The two items below were included and may help your students understand what’s going on with infinity. The are by Stu Schwartz.