A question on the AP Calculus Community bulletin board this past Sunday inspired me to write this brief outline of what the derivatives of parametric equations mean and where they come from.

The Position Equation or Position Vector

A parametric equation gives the coordinates of points (x, y) in the plane as functions of a third variable, usually t for time. The resulting graph can be thought of as the locus of a point moving in the plane as a function of time. This is no different than giving the same two functions as a position vector, and both approaches are used. (A position vector has its “tail” at the origin and its “tip” tracing the path as it moves.)

For example, the position of a point on the flange of a railroad wheel rolling on a horizontal track (called a prolate cycloid) is given by the parametric equations

Or by the position vector with the same components

Derivatives and the Velocity Vector

. This is a vector pointing in the direction of motion and whose length,

, is the speed of the moving object.

The slope of the tangent vector is the usual derivative dy/dx. It is found by differentiating dy/dt implicitly with respect to x. Therefore,

There is no need to solve for t in terms of x since dt/dx is the reciprocal of dx/dt, instead of multiplying by dt/dx we can divide by dx/dt:

Second Derivatives and the Acceleration Vector

is found by differentiating dy/dx, which is a function of t, implicitly with respect to x:

Here are two still figures so you can see the relationships. On the left is the starting position t = 0 with the y-axis removed for clarity. At this point the red velocity vector is

indicating that the object will start by moving directly left. The green acceleration vector is

pulling the velocity and therefore the object directly up. The second figure shows the vectors later in the first revolution. Note that the velocity vector is in the direction of motion and tangent to the path shown in blue. 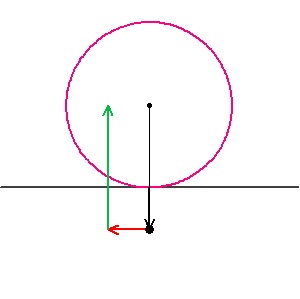 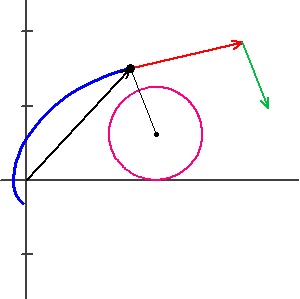