I posted a challenge question on March 28, 2013. Only one person, “April,”  replied with an explanation and it was a very good and succinct answer. You may read it here.

The conundrum resulted from trying to calculate when a parabolic bowl was half full. Using the “disk” method there was one answer; using the “shell” method resulted in a different answer. Both are correct; how can that be?

The explanation is this:

When you half fill the bowl in the usual way, by pouring water into it, the water accumulates in the bottom until the bowl is half full, as shown below. This is the result you get using the “disk” method. 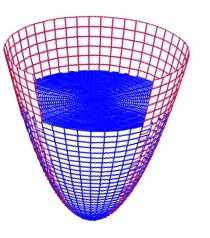 But filling the bowl by “shells” is different. Think of spraying the y-axis with paint.  When the paint dries, spray another layer, and then another. Each layer is a “shell.” The paint accumulates as “shells” around the y-axis until the bowl is half full. The paint forms a cylinder with a rounded (parabolic) bottom that fills half the bowl, as shown below.