This past week I attended the NCTM Annual Meeting in San Antonio, Texas. For many years now, the sessions included a panel discussion on AP Calculus. This year Stephen Davis, chief reader for AP Calculus, was the principal speaker. I would like to share a few of his comments and insights some of which may help your students on the upcoming exams.

One of the things I recommend in preparing your students for the exam is to go over the directions to both parts of the exam. You should especially explain the three-decimal place rule and the (non-) simplification policy.

Show all your work, even though a question may not explicitly remind you to do so. Clearly label any functions graphs, tables, or other objects that you use. Justifications require that you give mathematical reasons, and that you verify the needed conditions under which relevant theorems, properties, definitions, or tests are applied. Your work will be scored on the correctness and completeness of your methods as well as your answers. Answers without supporting work will usually not receive credit.

For an example of the first underlining sentence, consider 2016 AB 2. This is a linear motion (Type 2) question. Part (a) asks “At time t = 4, is the particle speeding up or slowing down?” According to the scoring standards, two points could be earned for “conclusion with reason.” This means that a correct conclusion of “slowing down” received no credit, because no work was shown. Correct work includes the computation of the velocity and acceleration at t = 4 and indication they since they have different signs the particle is slowing down.

In the same exam, 2016 BC 4 (c) illustrates the second underlined sentence above. This was a L’Hôpital’s Rule question. Just writing

does not earn the point. Students must indicate that they are using L’Hôpital’s Rule preferably by stating that the limits of the numerators and denominators at each stage are zero.

Another example from 2016 AB 3/BC 3 (Type 3): This problem showed the graph of a function f and asked about the function g defined as

. Students were required to specifically state that

somewhere, somehow, in some part of the question, showing that they understood the relationship implied by the Fundamental Theorem of Calculus.

People started asking questions of the kind they ask on the AP Calculus Community Bulletin Board. They are “what if” questions: What if a student forgets the dx?  What if the student gives open intervals and they should be closed? What if they use the x as the upper limit of integration and in the integrand? What if …? What if …?

Here is a comment I wrote a few days ago for the Community Bulletin board that Stephen was kind enough to mention:

I am sure you teach your students to do the problems correctly, use proper notation, and, even though this is not an English exam, to spell things correctly. You may deduct points in your class for failing to do any of that, or constantly remind them.

As others have pointed out, the readers do their best to give kids the credit they earn and there are not enough points to go around for some mistakes. The procedures for dx and missing parentheses etc. are not something you even need to tell or even mention to your students. Why would you? In scoring the mock exams take off when they make these mistakes. The mock exams should be a little harder than the real thing – that will only help the kids.

To answer your question: students will get full credit on the exams if they do everything right, and sometimes with a little less than everything right. Don’t show your students the minimum they can get away with. They don’t need to know that and it does not help them.

The exceptions are the algebraic and numerical simplifying rules and the three or more-decimal place rule. 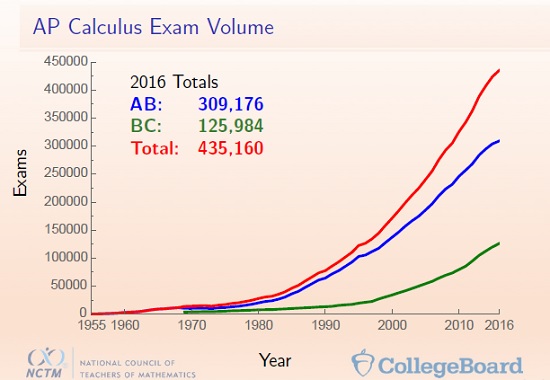 Stephen included slide above in his presentation. It shows the growth in the number of students taking the AP Calculus exams since they first stared in 1956. The AB/BC split first happened in 1969. For years, we have been looking at what looked like exponential growth knowing this wasn’t possible. This kind of growth surely must be logistic since there is an upper limit to the number of students who could take the exam, namely the number of kids in high school.

So, have we reached the point where the numbers start to level off? Or is this just a slight pause such as happened around 1989 and again around 1995? Stay tuned.