One of the great things – at least I like it – about Taylor series is that they are unique. There is only one Taylor series for any function centered at a given point, What that means is that any way you get it, it’s right.

Faced with writing the power series for, say,

, instead of cranking out a bunch of derivatives, we can say this looks a lot like the formula for the sum of a geometric series,

Furthermore, since a geometric series converges only when

, the interval of convergence for this series is

and we don’t even have to check the endpoints.

There are other choices as well.  We could write

and then expand the binomial using the binomial theorem. Or we could use the technique of long division of polynomials to divide 3x by (1 – 2x) – leaving the divisor as written here.

This works even in more complicated situations. Let

. Begin by dividing each term by –4. This gives

. Then treating this as a geometric series

The interval of convergence is

I once heard of a student making one of those great “mistakes.” For the series above, she divided by (–x2) and found that

So, what’s wrong with that?

Okay, it’s not a Taylor Series since a Taylor series is allowed only non-negative exponents, but it’s still a geometric series. Let’s take a look at its interval of convergence:

, Whoa, that’s different and not even an interval.

The graph will make things clear (as usual): 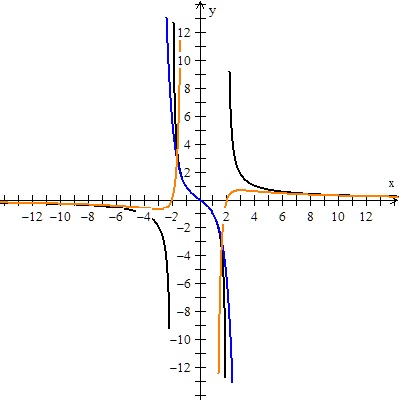 The original function graphed as a rational expression is shown in black. The Taylor polynomial (4 terms) is shown in blue; it approximates the function well between –2 and 2 as we should expect. The red graph is the student’s series (4 terms) and it is a good approximation of the series outside of the interval (–2, 2), far outside! Way Cool!

Of course, this kind of series is not studied in beginning calculus. It may make a good topic for a report or project for someone in your class.

One thought on “Geometric Series – Far Out”