Continuing my occasional series on Good Questions, today’s Good Question is a multiple-choice question from the 2008 AB Calculus exam, number 10. As an exam question it is only so-so, but it has a lot of potential for having a discussion of relative accuracy of Riemann sums in relation to the definite integral they approximate. The key to doing this is to look at the graph. The question relates the numerical and the graphical aspect of Riemann sums, two parts of the Rule of Four.

The question presented the graph of a function f, shown below and asked which of five answer choices has the least value. The choices were

Looking at a single interval from 1 to 3, it is easy to see by drawing or picturing the rectangle that the least Riemann sum will be R, the right Riemann sum.

So that answers the question, but there is a lot more you can do with the situation. The first that comes to mind is to have your students to put the five values in order from least to greatest. Stop here and try it for yourself.

R is the smallest and L is the largest. Since the top of a trapezoid between the endpoints of the function on the interval lies below the graph of the function, T is less than I. 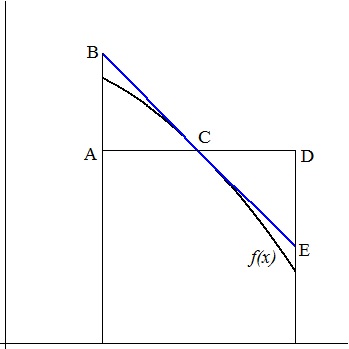 Consider the figure above. C is the midpoint of segment AD.The area of the region between AD and the x-axis is the midpoint approximation. Segment BE is tangent to f(x) at C.  Notice that

At least in this case.